This post is brought to you by Southern Cross Insurance 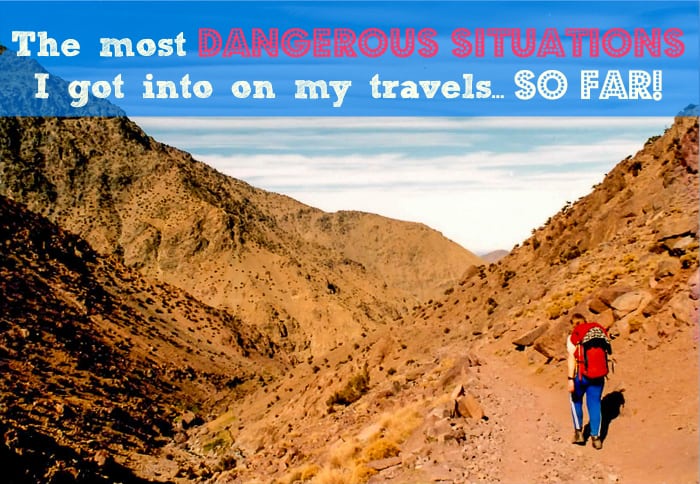 I loved travelling before I had the children, and especially loved wafting around the world alone.

I do still love travelling but let’s just say it’s got a lot tamer, and there’s much less drunken hilarity.

In my backpacker days, I really did have some life threatening moments, but survived them, thank goodness. Maybe motherhood is in reality more dangerous. You could just die of boredom some days.

Did you make any marvellous escapes buring your escapades? Did you ever genuinely fear for your life? 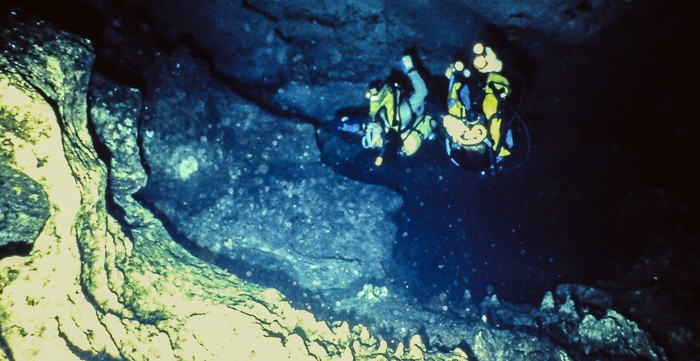 This is a photo from that very cave

Disorientated whilst cave diving off Borneo

The cave is huge, vast, a cavernous cavern. It’s about 15 metres down an underwater cliff on the sublime island of Sipadan off the east coast of Sabah. We swim in, switch the torches on, we hang in the black water.

Looking back the entrance to the cavern is bright and blue, silhouettes of sharks and turtles pass by.

At the back is the entrance to a deeper cavern, with a turtle skeleton in it. We gaze at it, then… what, I don’t know, a wave of dizziness. There’s water in my mask, I don’t know which way is up and which down. Heart is thundering… it feels like hours, it’s seconds and my buddy has me by the arm.

Don’t tell me that an idiot I was, I know. I was 19 and a complete maniac. Fingers crossed my kids are a lot wiseer than I was.

I’d come from Italy where I’d been living for a year. I’d gone from Genova to Rome to drop off some stuff then did the train trip Rome – Barcelona in a single trip. I probably hadn’t slept or been sober for days.

Anyway, myself and two Irish guys got rolling drunk on the ferry from Barcelona to Palma de Majorca.

We staggered off the boat at night and I had to travel 70km to get to where my family was staying at Porto Christo. So I started hitching… and was picked up by a middle-aged taxi driver.

He did drop me off safe and sound but on the way he had suffered a bout of WHT (wandering hand trouble). I had threatened to burn his hand with my cigarette and had been blethering away in Italian telling him I was as old as his daughter.

OH DEAR… that could have gone very badly wrong… I later hitched in Borneo and around Australia… but that night in Palma was when I really did take my life in my hands. Still mortified. 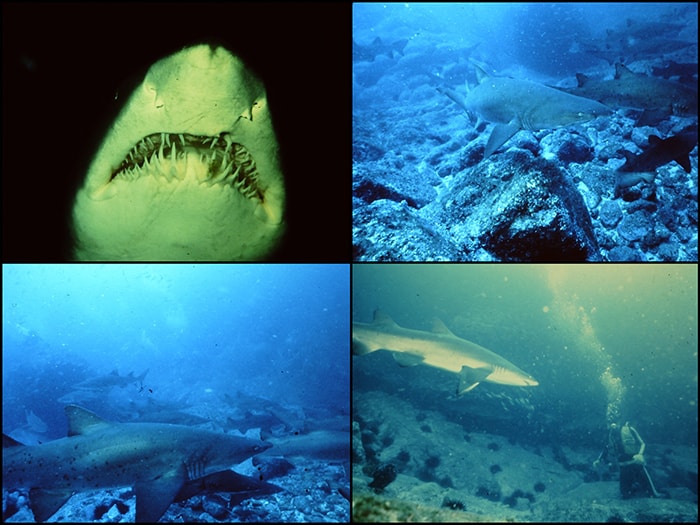 A shark heading straight for my jugular

So there we were one night scuba diving on the Great Barrier Reef. It was myself and a marine biologist who was helping me with a story on coral.

Our torches were strong and bright, the gullies we were swimming through were teeming with fish, vibrant pink soft corals and gently moving sea fans.

And – whoosh – a shark was coming right at me, heading straight for my jugular and it was HUGE. Its eyes gleamed in my torchlight, its teeth sparkled.

I stopped. It didn’t, it was a rocket, a missile…

It dipped and whooshed under me at the last moment. I shook for the rest of the dive.

‘What about that SHARK!” I said to my buddy in the boat. 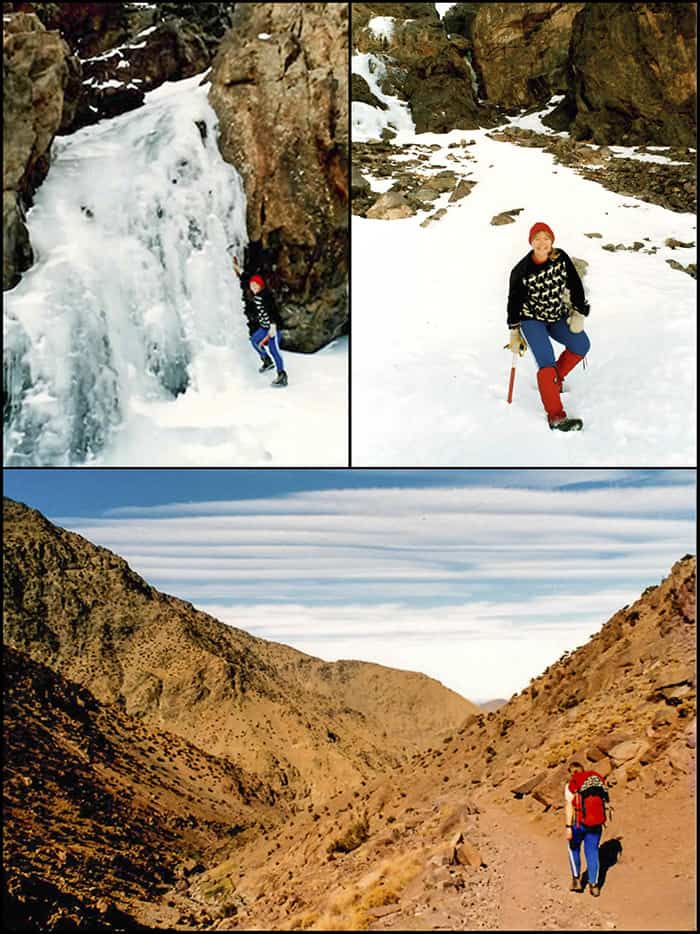 What I was doing there, I have no idea? I’m a water baby, a salty sea dog… but there we were 13,000ft up in the High Atlas, having walked 7 hours from the last village.

It must have been love. Yes, it was… a boyfriend called Neil. Being a mad mountaineer, he’d brought ice axes and crampons for us both. Fabulous. No pressure.

We went climbing up frozen waterfalls, tap tap, tap tap… crack, crack.. and fell and landed in a heap. The sound of that ice cracking will never leave me. And luckily for us, no bones were broken.

And where is Neil now? He’s led the life I thought I would. He’s written travel guides and books for the past 25 years and he’s been everywhere… whilst I have been doing the washing up. Surely shome mishtake?

This was scary at the time, but in fact, the pigeon pie in Marrakesh that gave me terrible violent vomiting etc etc was maybe even more life threatening. 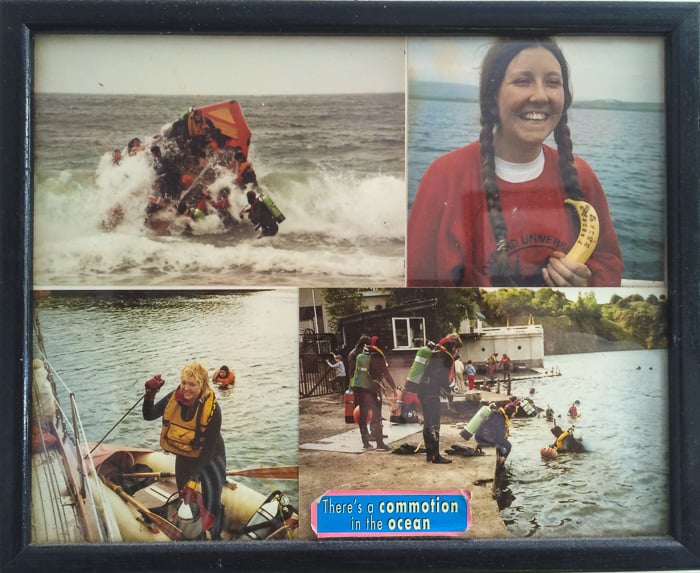 There’s Dot with a banana with our decompression times writteon it!

Diving buddy caught up in line inside a WW1 wreck in Scapa Flow, Orkney

So my great uni diving buddy Dot and I were exploring the scuttled wrecks of the First World War German Fleet in Scapa Flow in the Orkneys in the far, far north of Scotland.

We had been inside several of the wrecks before, not for long as they lie very deep and we weren’t planning on doing decompression stops.

We used a reel and line, clipping it to the outside of the ship then letting it spin out as we swam. On the way out Dot would wind back in the reel.

Almost out of time we were in a long corridor, dim green light coming in through a row of porthole. I heard something and turned to find Dot had become tangled up in the line and couldn’t move.

In the five minutes we had left I did manage to slowly and carefully untangle her and we found out way out, after which my heart exploded. Bloody hell, that was close. 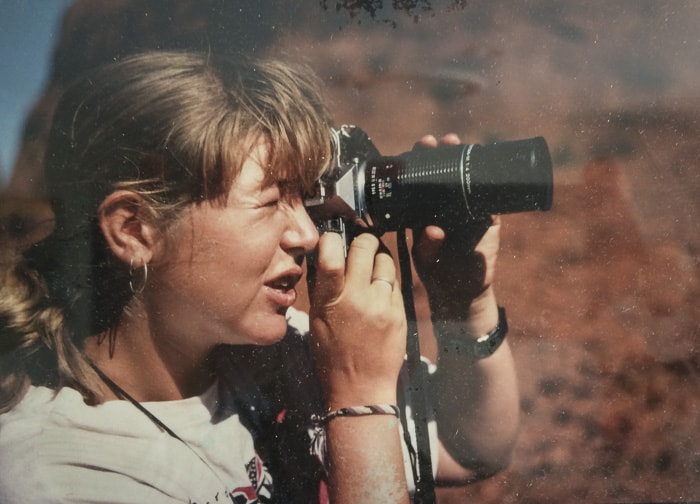 As a young backpacker at Kata Tjuta, posing as ever.

Ah, life is too tame these days. Without the ocean swimming, where would the exhileration come from?

I hate to admit that during most of my travels, I never had travel insurance… not because I really objected but because I’d rarely get around to it.

I did when in the USA though, medical bills are so expensive there. I did too when older and wiser and travelling in Ghana in West Africa and Kenya and Zanzibar. By then I knew that being able to be medivacced out in an emergency was a luxury that I wanted to afford.

When you travel overseas do you insure your trip?  This post was sponsored by Southern Cross Travel and they’re keen to know. And keen that you do.

And let’s keep safe… at least until the family is all grown up….

When we’re grey nomads, let’s have do dangerous, thrilling adventures once more.

Have you had a marvellous escape from peril?

Can you share it with us in the comments below?