Last Sunday, I parked the car at the playing fields near Whale Beach and jumped on the shuttle bus down to Palm Beach. I got there at 9am and saw the last waves of the 1km Little Big Swim setting off.

Myself and my camera and the Can Too group I have been training with were here for the Big Swim, a race (a swim not a race for me) from Palm Beach to Whale Beach.

Margaret Anne was on the beach, she’s a Can Too fundraiser extraordinaire. She has run and swum and has raised a huge amount of money for Cure Cancer Australia. She cheers Can Tooers out and then was there at the end when we swam in yelling into her megaphone ‘Go Can Too!’ 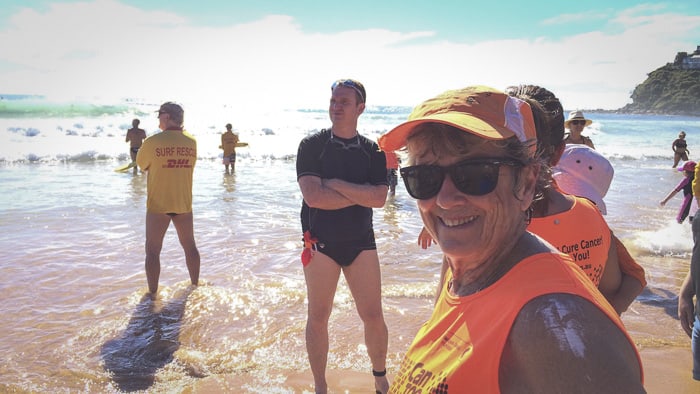 We had a briefing at 9.30am, our swim coach talked us through the course, told us to expect chop and turbulence as we reached Whale Beach, encouraged us to dig deep.

Annie, who started Can Too, reminded us that however scared we feel and however hard we have to work, our fear is nothing like the feelings that ourselves and our friends and family feel when they get a diagnosis of cancer. Our fundraising is making a difference.

I’m always a bit nervous about going out through the waves.  There were some big sets coming through and I had to swim under about seven or eight quite big breaking waves. But there was room to breathe in between them and eventually I got out the back.

No photos of going through the surf, I was flat out making my way through.

These photos give no indication of the swell that we were swimming through round the headland. Nor of the huge crashing waves that awaited us at Whale Beach.

I was too busy staying safe to take any photos.

A Can Too coach swam me in, telling me when to go with the waves and when to duck back under the dumpers. I was so grateful for the help. The last two waves did chuck me around a wee bit and a cramp struck my calf on the very last wave.

But then I was up and running through the exit. Hooray! 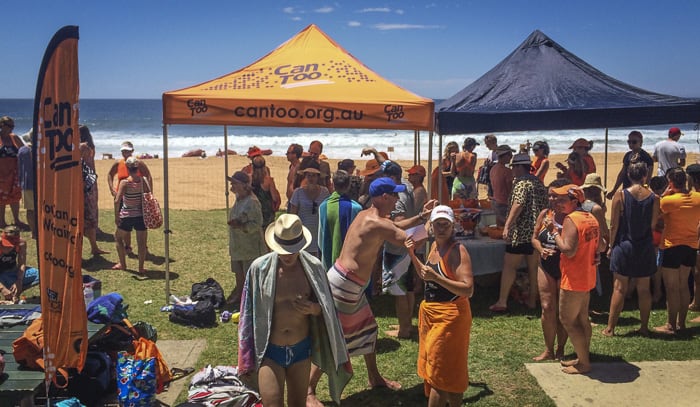 I found some friends and went up to the tent on the beach. Wearily.

The fastest swimmer came in in 32 minutes and 55 seconds!!

Hey, I got faster!

But it’s all about the swim, it’s not a race for me. I enjoy the swim and feel good at the end. I love the exhileration of it all, and the cameraderie.

And the Big Swim is the polar opposite of my general life here in the Sydney suburbs, let’s face it.

Have you been in the ocean recently?

Do you love a swim too?