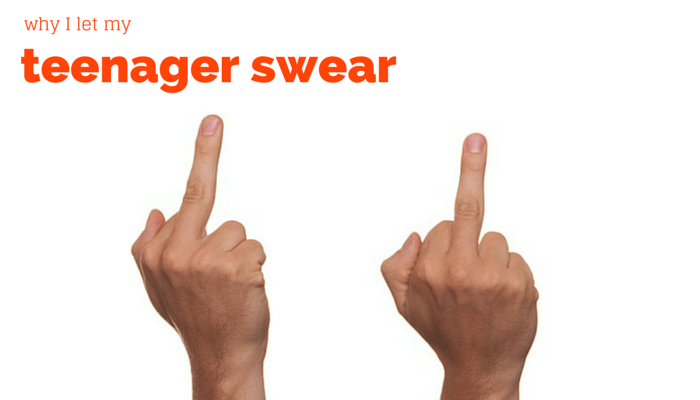 It’s totally my own fault that I find myself the menopausal mother of two teenagers and the younger twin terrors.

I could have had my children younger and not had all these hormones clashing with each other.

Teenagers can really mess with your head (because their brains aren’t working well) and I’m lucky that really only one of mine is definitely trying hard to wind me up.

His copious swearing is just one of his many attempts to drive me totally demented. But I’m not falling for it!

We have to pick our battles with all of the kids, and especially with teenagers. So I decided that I wasn’t going to let the swearing rile me up.

Would you do the same? Or is swearing a definite no-go in your house?

But swearing has its limits

Anyway, generally I just completely ignore his expletives and colourful adjectives… and have explained to him my limits:

No swearing when we are out

No swearing when the twins’ friends are in the house

No swearing when my friends are around

I have to listen to a lot of nonsense

The twins started to pick up and copy his swearing

When the younger kids swear

When this started, I jumped on it firmly. They think I am totally unfair… but I explained that Teen15 was never allowed to swear at 8 years old and they can start when they are 15… but only until their hormones settle down.

The best advice I ever got about teenagers

Before my kids were teens I knew a mother of teens who always said:

I remember her wise words well partly because that mother died very suddenly, of a brain aneurysm, at 51, just the age I am now.

She’s lovingly remembered and much missed.

I loved her advice and love the advice to carefully pick battles with kids. Swearing is part of a rich Aussie vocabulary. And it’s better than punching holes in the wall… but let’s leave that topic for another time.

What balls do you let roll right by?

And do you swear much yourself?!!

Stay calm, I will if you will.

Nine Reasons Not To Have Babies In Your Forties

Why The FIFO LIfestyle Can Just F*!k Off