The Bay Run is one of Sydney’s best running, walking and cycling tracks: it’s ideal families that like to exercise. With the walk being very stroller-friendly, the Bay Run makes an excellent expedition for families, regardless of the age of the children. 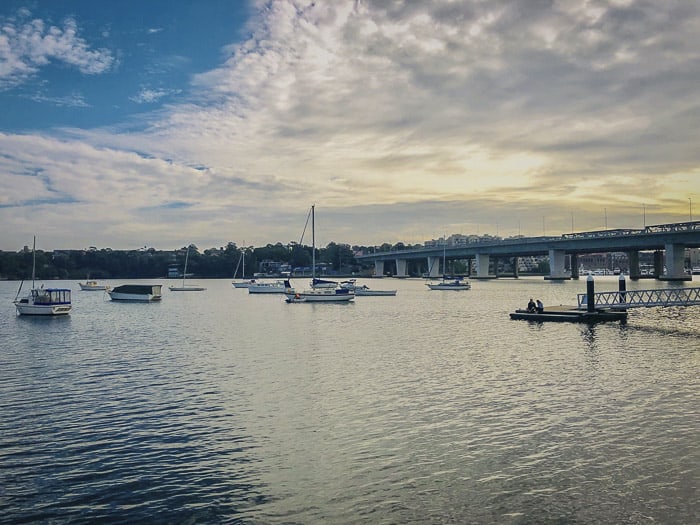 We love this family-friendly walking and bike path because it is mostly flat and it offers great views of the bay and the distant city. The circuit passes through several parks, including Brett Park in Drummoyne, Callan and King Georges Parks in Rozelle and Leichhardt Park. King Georges and Leichhardt parks have the best playgrounds. And, not too far away from the Bay Run, there is the Livvi’s Place Playground at Timbrell Park, too.

There are toilets and picnic tables in the majority of the parks. If you are thirsty or hungry, you will find several cafés to stop on the Bay Run. Most importantly, it is a free activity that you might like to add on your list. And, it is good for all fitness levels!

Here’s all the information you need to plan your family’s trip to do the Bay Run.

The Bay Run is a short, easy and scenic 7 km shared-use path for pedestrians and cyclists in Sydney’s Inner West. Popular with locals, it can get busy at the weekends, however there is always room to walk, run or cycle at your own pace.

Without kids, it takes approximately one hour to complete the circuit at a brisk pace. With kids, it is a different story. Luckily, the Bay Run has plenty of places to break up the journey. Actually, you can spend a whole day here, and the kids will not get bored. 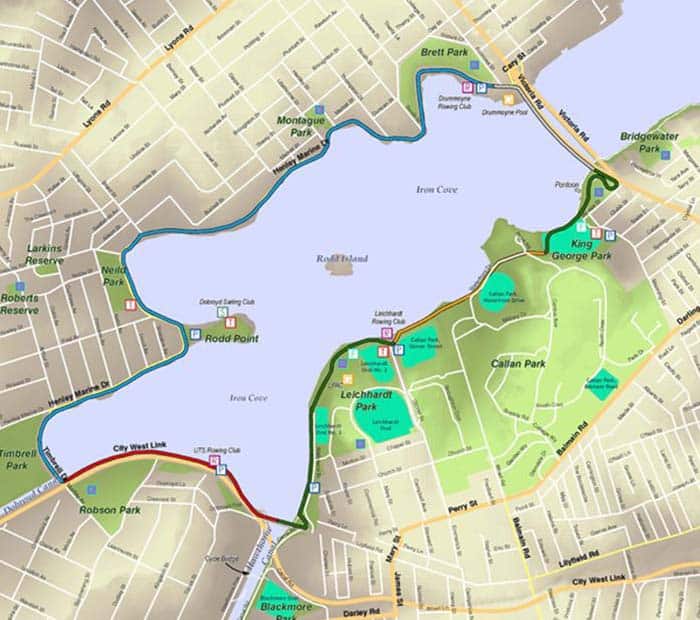 Popular starting points are the ones near the bus stops at Victoria Rd in the north-east, Robson Park (where there are bus stops nearby, too), Nield Park where you can grab a coffee at Nield Park Pavillion before you start, Timbrell Park with its famous Livvi’s Playground (however, may not be the best option as your kids might not want to leave!), Rodd Park in the west, and Blackmore Oval, which has Leichhardt and Hawthorne light rail stops nearby.

Tip: have a look at the Bay Run map before you go. So, you can plan your day better. If not, you can follow our suggestion.

The Bay Run in Stages – Our suggestion

We choose to start at King George Park in Rozelle because parking is very convenient (free and there are plenty of spots) and it is a nice spot to stretch before and afterwards, plus there’s a fantastic toilet block there.

Also, if the local clubs are playing, you might be lucky and they might be holding a sausage sizzle. When the kiosk of the clubs is open, they also sell drinks and snacks.

We decided to go anti-clockwise, because we wanted to save the Leichhardt Playground for the very end, this kept our daughters motivated.

King George Park has lots of fields that the community uses at the weekend to play football and other sports. The family-friendly atmosphere was exactly what we needed to start our active Sunday. We parked the bikes and we stopped at the exercise station and then, the kids had a good play at the Constellation Playground.

The Constellation Playground is not as big as other playgrounds around the Bay Run. So, after going down the slides several times and having fun with the flying fox, it was time to continue. 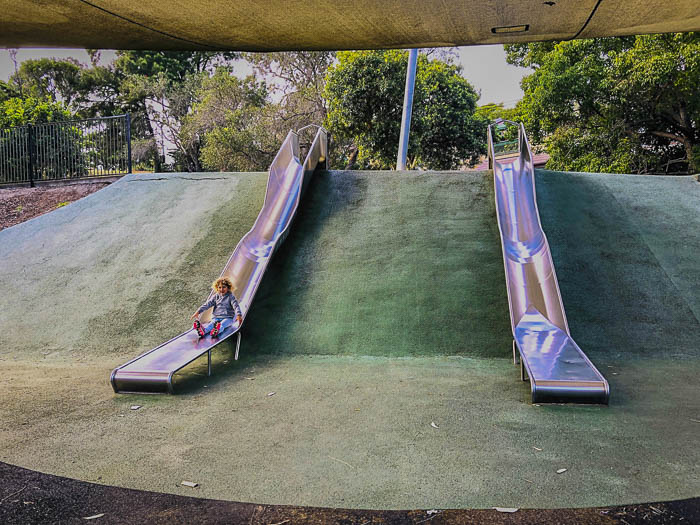 There is a hilly section from the Constellation Playground to the Iron Cove Bridge with a steep ramp that provides pedestrian access to the bridge. This is the only part of the circuit that our daughters struggled. The rest is quite flat. Therefore, it was good that we did this part of the circuit at the beginning.

After the effort, you will be rewarded with the best views of the bay. 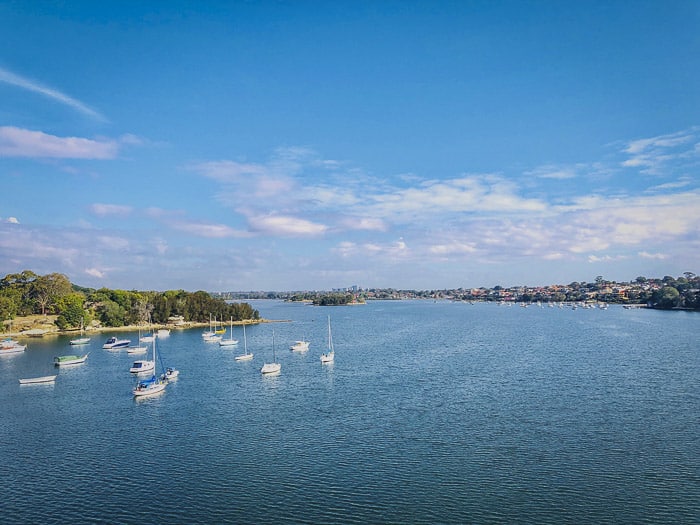 The Iron Cove Bridge is a heritage listed impressive steel truss bridge that links the suburbs of Drummoyne to Rozelle. The new bridge was built alongside the original steel tress bridge from the 1940s. The design of the bridge incorporates many elements of the Inter-War Art Deco style, which was at its peak in Australia between 1915 and 1940.

Despite the four lanes of traffic, it never felt unsafe to ride the bicycle on the bridge. 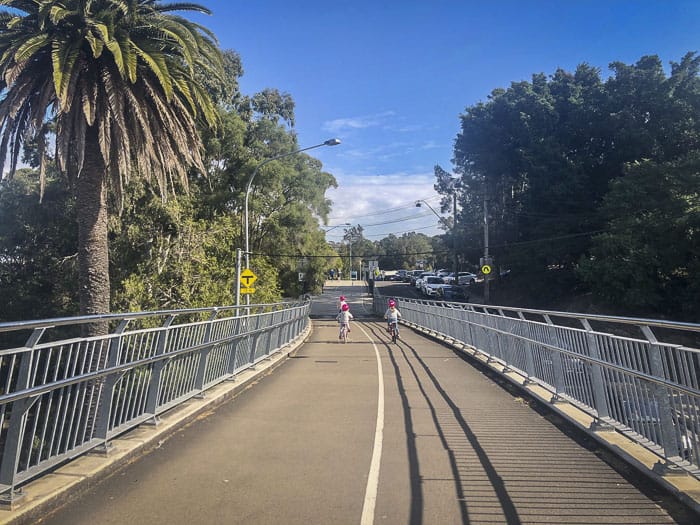 Opposite the swimming centre, there is Brett Park, which has plenty of shade and a little playground. However, you will need to cross Henley Marine Drive, which can be quite busy after the Victoria Avenue intersection. Henley Marine Drive was named after Sir Thomas Henley, described as “one of the most prominent figures in the public life of NSW”. 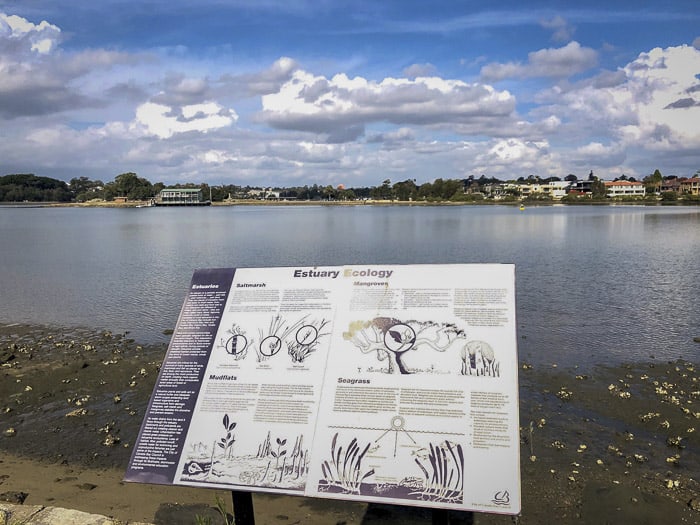 The wide footpath follows around the mangrove-lined foreshores of Iron Cove. Along the way, enjoy the vistas of the beautiful Iron Cove Bay on the Parramatta River. Stop and take some time to read the interpretive signs that provide interesting facts about the types of flora and fauna in the surrounding bay.

About halfway before you reach Nield Park, you will find the Thompson Street Jetty. 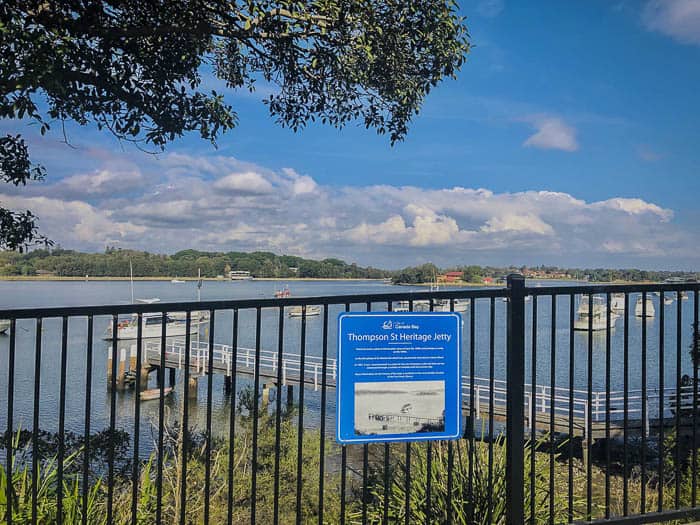 Our daughters were already very tired when we arrived at Nield Park. However, we managed to keep moving as we kept reminding them that we were going to find a very cool playground.

If your kids are not tired, you can visit Rodd Park. It is a great place to have a break and take some pictures of the city’s skyline, wonderful waterways and Rodd Island, a recreational reserve that belongs to the Sydney Harbour National Park.

Alternatively, you can stop at Nield Park, where you will find a small playground. The playground has some shade, something to take into account, as from this point the cycleway doesn’t have lots of trees. The Nield Park Pavilion is conveniently located near the playground. However, you do need to cross the street so we decided not to stop.

In 2015, the Iron Cove Creek bike bridge opened to provide a safe crossing from Timbrell Drive to the City West Link. The wide views over the Parramatta River are spectacular from the bridge. Get your camera ready! 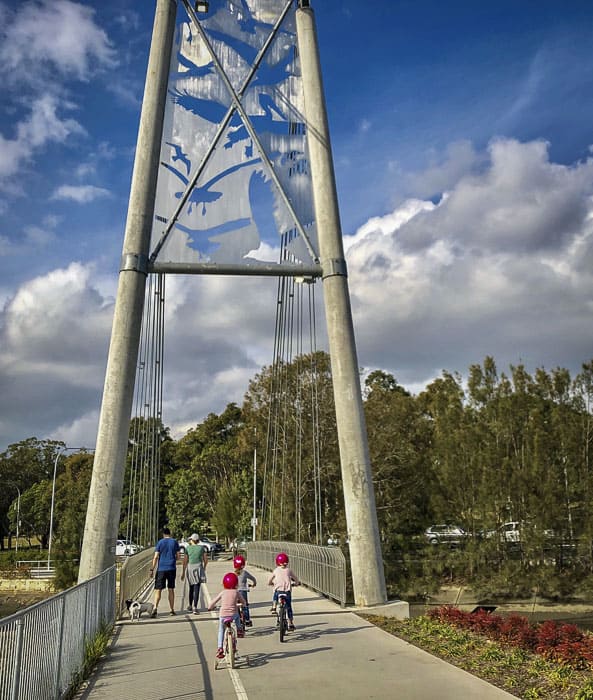 After the bike bridge, you will find Robson Park, which has manicured gardens and a little playground.

After five minutes of riding, you will arrive at Leichhardt Park, which is the biggest park located right on the bay. It has marvellous views, spaces to sit and have a picnic, a drinking fountain, a toilet block, an outdoor fitness station and a fantastic fenced and shaded playground for all ages. As it is next to the Leichhardt Park Aquatic Centre, it has plenty of space to park.

This playground’s equipment is not the newest, but it is well maintained and it has plenty of elements to keep the children entertained. 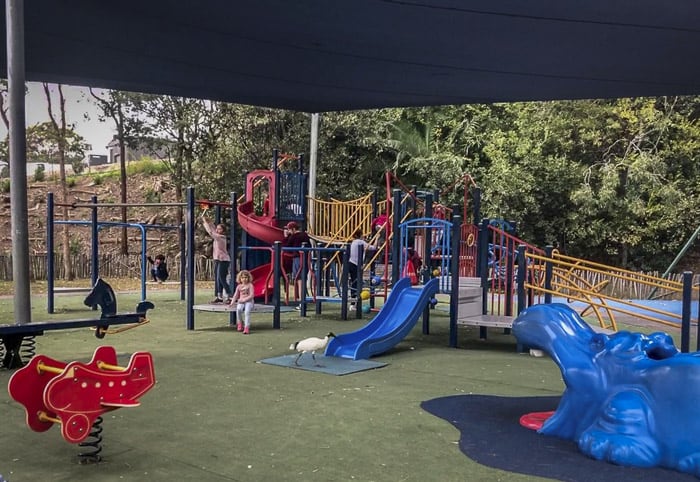 Between Leichhardt Park and King George Park, you will find the sports grounds of Callan Park Oval and the heritage-listed historic buildings of Rozelle Hospital. After the grounds of the hospital, the last section of the circuit is very easy, as it goes downhill towards King George Park.

Toilets: several along the circuit, check the map.

Coffee suggestions: The Nield Park Pavillion and the café besides the Livvi’s Place playground at Timbrell Park.

Mum’s report:  Whether you run, walk or cycle, the Bay Run is always a great choice. With its 7km loop around Iron Cove is one of Sydney’s most famous cycleways and family-friendly places to spend an active day. The facilities along the Bay Run are excellent. There are plenty of parks, playgrounds, picnic spots, water stations and café’s along the way to have a rest and keep the fluids up. The views of the city and the bay are beautiful. Furthermore, if you are interested in history, you will find some interesting landmarks such as the Iron Cove Bridge, the Thompson Jetty and the Rozelle Hospital.

The Bay Run is a keep fit urban heaven for families, suitable for everyone and all abilities. 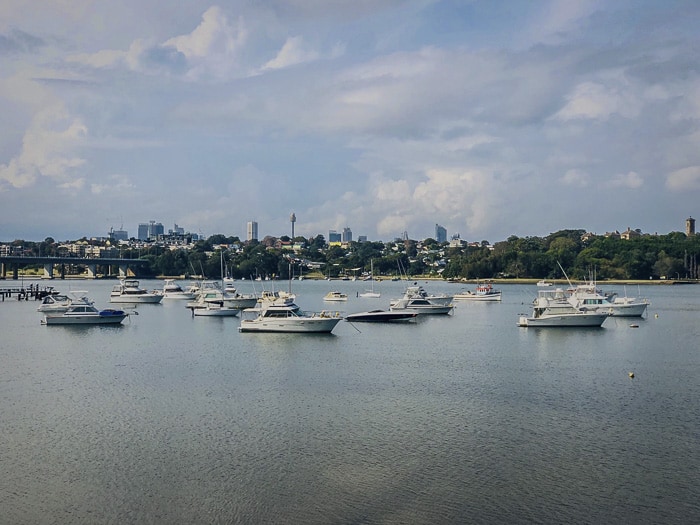 Bus stops: Yes, several. On Victoria Road between Park Avenue and Cary Street, there is the bus stop for all the bus routes that go to the Birkenhead Point Brand Outlet. So, this is probably the stop that has more bus routes in the surrounding area of the Bay Run. However, you can also find other stops close to the circuit.

Ferry nearby: Birkenhead Point. You will need to cross Victoria Road. Then, you can start the circuit from the Drummoyne Swimming Centre on Henley Marine Drive.

Light rail nearby: Leichhardt and Hawthorne stops. Hawthorne is a better option if you have younger kids, as it is closer to Richard Murden Reserve.

Parking:  There is plenty of parking around the course. However, our advice is that you choose the parking area at one of the parks, as you can take your kids to the toilet before starting the circuit.

There’s lots of wonderful stroller walks around Sydney. Find out the top 10 here

Read about cycling or running around the Narrabeen lake. This is also one of our favourite spots to cycle with kids! 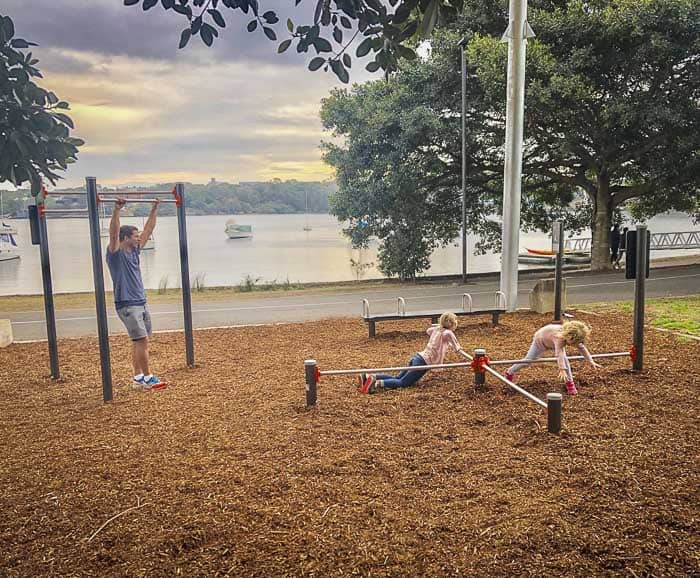 After the Bay Run, we felt refreshed and invigorated. You would think that our kids would have been worn out after cycling and playing in the playgrounds. Surprisingly, they still had energy to try the fitness equipment!

We had a great winter day away from the screens.

What other places would you recommend?