Well, our family had a terrific time in Vietnam, even though we took our twin teenagers with us: miracle!  Vietnam is a super colourful and bustling country, with great natural beauty, outdoor activities and also great shopping opportunities. What more could they, or we, desire?

Ours was a very simple holiday, visiting the best-known places with the most famous, and iconic, sites. We were in Vietnam for only two weeks – not long enough. We’d definitely like to return one fine day and I’ll list at the end the places we would make sure we include in our next itinerary.

Taking teenagers overseas can be a challenge, they have all their own ideas on what they’d like to do and many of those ideas involve staring deep into their beloved screens.

One of the reasons our trip did work well was that we did not allow the teenagers to take their own phones. We had one iPhone and one iPad between the four of us… and a pack of Uno cards which got a great workout.

Our visit was organised for us by Vietnam Paradise Travel, a Hanoi-based company. There were many advantages in having everything sorted out for us, which I’ll detail at the end.

This list of great things to do in Vietnam with teenagers starts in Hanoi, where we arrived, and ends in Ho Chi Minh City aka Saigon in the south, where we flew out.

We stayed in the Rex Hotel, right in the centre of Hanoi’s Old Quarter. This made it so easy to walk all over this fascinating area, by day and at night. 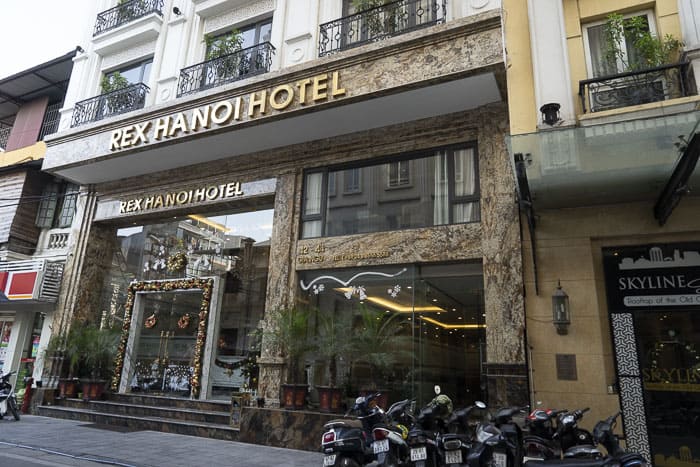 There were little shops, cafes and restaurants, and street sellers around every corner, plus buzzing motorbikes of course. 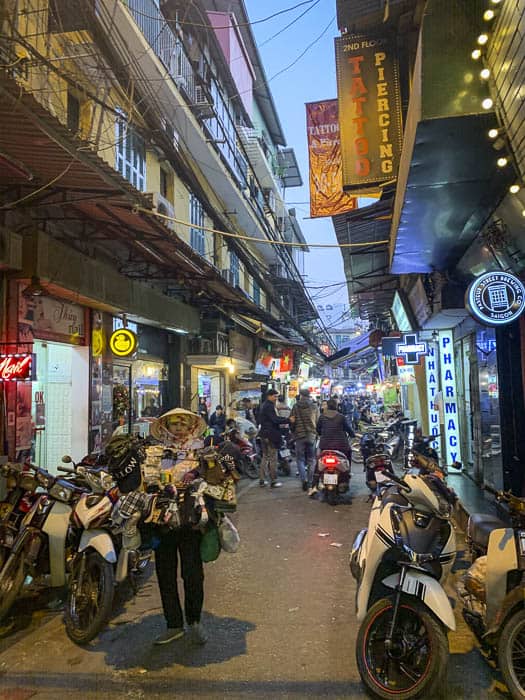 Ho Chi Minh Mausoleum and the House on Stilts

A visit to the Hanoi Hilton where American POWs were kept was also an eye-opener, particularly about the cruel treatment of Vietnamese people during the French colonial period. 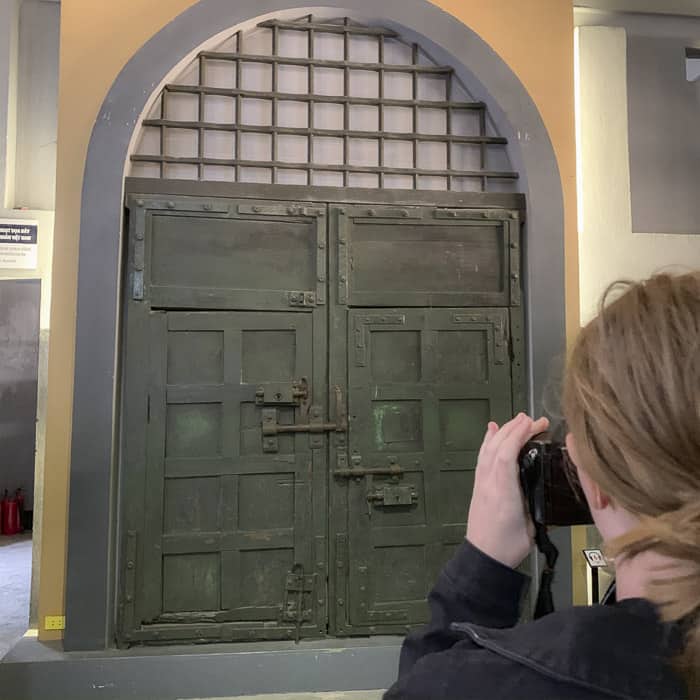 No escape likely through that door

A Cyclo Ride Around Town

This is a very touristy thing to do, but for a reason. A cyclo ride is such fun and we saw a lot of places in the Old Quarter which we then explored on foot later. 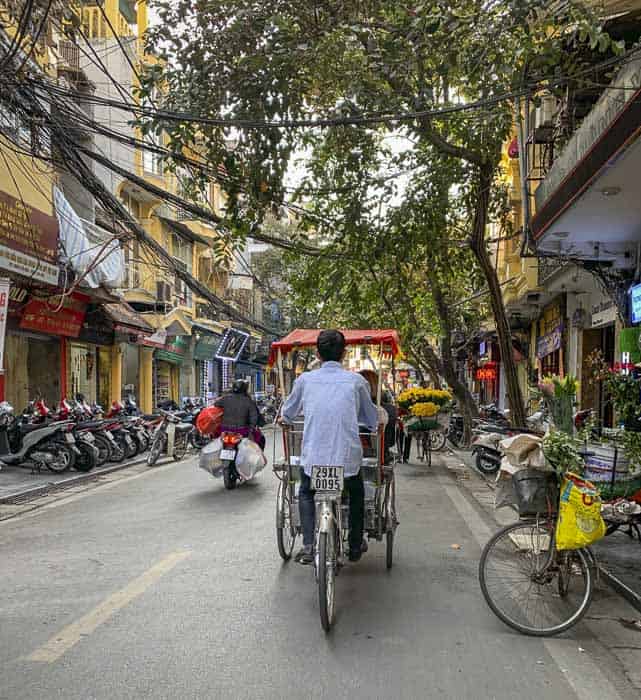 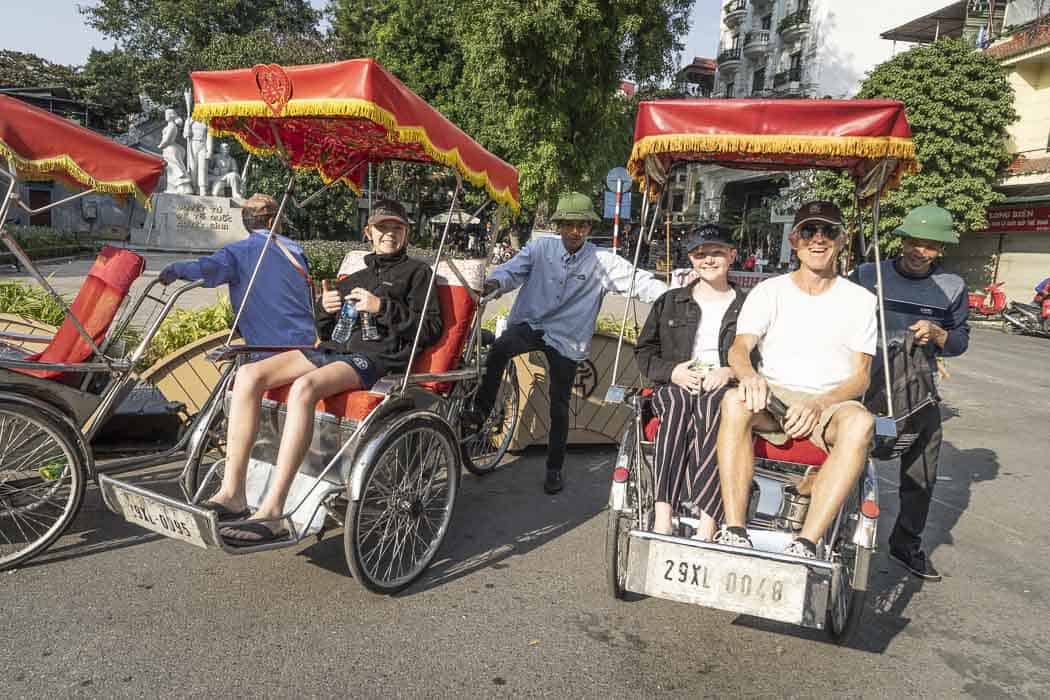 We really did enjoy this performance, it is a must see with kids of all ages in Hanoi. Many different stories were acted out by the puppets, with heaps of action and humour.

The Temple of Literature

This was a historic university, we had no idea about it before we went and were so impressed by the buildings and by the stories of the thousands of years of learning that took place here.

This was another time when having our private guide was absolutely invaluable. We learnt so many things so fast.

There are dozens of little shops in the Old Quarter, all selling very similar items. Some of the gear is really good, and costs a lot less than you’d pay anywhere else. Ms Teen13 learned how to bargain as we shopped. We were probably not great at this, but we did get in plenty of practice.

Halong Bay is just stunningly beautiful, what else can we say? It really was a case of having one amazing vista after another. The teenagers enjoyed exploring caves and kayaking amongst the karst limestone islands. They loved a bit of squid fishing and they absolutely adored the luxurious cabins with spa bath in the bathroom.

I’ve written a whole article just on Halong Bay and why we recommend a two-night visit, find it here.

Hoi An: The Venice of Vietnam

Now, I have to say that Hoi An was probably our very favourite place in Vietnam. We stayed right on the edge of the Ancient Town and so could walk about it many times a day and really get to know it.

Built along the Thu Bon river, Hoi An was a busy trading port between the 15th and 19th centuries, with the architecture showing Chinese and Japanese influence, as well as Vietnamese and, later, French colonial input. Read all about Hoi An Ancient Town on the UNESCO website here.

Like Venice, Hoi An is absolutely PACKED with tourists. The best time to walk around town and visit the old houses is in the morning. Hordes of tour groups are bussed in during the afternoons and evenings and they really pack the town out.

During our half-day class we cooked:Hoi An pancakes, seafood salad, fresh rice paper rolls (we even made the rice paper), noodles with chicken, steamed fish on a bed of vegetables. We then got sat down and scoffed the lot. Excellent!

NB Ho Chi Minh City is the official name of the south’s largest city, but it is also known as Saigon. The two names seem to be interchangeable; HCMC is also used.

Now Ho Chi Minh City was hot, very hot and also very humid, and the teenagers were pretty tired. So we let our daughter miss a bit of this day tour, this was a pity! We had a guide, Edward, who was with us for the three full days we spent in and around HCMC. This was terrific as we got to know him well and heard many interesting stories of his life and the lives of his parents, grandparents and great-grandparents. I think having a young person explain Vietnam’s history through the prism of his own family’s lives was super interesting for the teenagers, as well as we parents.

This is such a hard-hitting museum, with many, many graphic images of war. I do not think that many young children would make suitable visitors, however it is terrific for teenagers. Mine certainly learned a LOT of things that they did not know; so did Paul and myself.

The reconstructed prisons, especially the horrific ‘tiger cages’ were deeply disturbing. So too the section on war crimes and on the long-lasting effects of the terrible Agent Orange.

The War Museum (and the Cu Chi Tunnels) combined with the museums in Hanoi made me realise that I really had had no real knowledge of both the French occupation of Vietnam and the ‘American War’ that followed it so closely and so tragically. Expect distress and heartbreak when you take the kids to this museum, with some moments of hope, particularly the sections showing the Anti-War movements.

When in HCMC, we started to watch the 10-part Netflix series by Ken Burns and Lynn Novick called simply ‘The Vietnam War.’ This shows the war from all angles with many interviewees from the North as well as the South of Vietnam. We highly recommend it.

The tunnel complex is about 70km from the centre of HCMC, about a 2 hours drive, depending on traffic. Only a tiny section of the hundreds of kilometres of tunnels is open to the public. This is a busy tourist complex, with really interesting displays showing all the facilities which were build underground.

Edward, our guide, told us that his mother and grandparents were in Saigon during the war, and that people there had no idea that all these tunnels were operational during the war, even though they were so close to the city.

On our final full day in Vietnam we went with Edward to the Mekong Delta, where we visited farms on an island and enjoyed journeys on little boats. A visit to a huge temple on the way was really enjoyable, we loved all the huge Buddhas we saw.

There were many, many other tourists doing the same trip and it did feel very busy. Next time, we’d loved to get much, much further out of the city areas, and deeper into the countryside. Perhaps one needs to do a few days of cruising for that.

Vietnamese food is pretty popular all over the world, but best tasted in Vietnam itself! There are so many different options, from street and market vendors to local pho restaurants as seen in some of these photos.

We also tried Hum Restaurant in Ho Chi Minh City which is vegetarian and pretty upmarket and really was terrific. Mango Mango in Hoi An was also an expensive choice but really good, and we loved the open-plan kitchen upstairs and the excellent mocktails.

Mainly though we ate pretty simply in the evenings, in local places with a focus on noodle and rice dishes for the teens. Our lunches were generally included in the cost of the tours we were on, and were very plentiful so evening meals did not need to be huge.

The best food we ate overall was probably that which we cooked ourselves at the Red Bridge Cooking School – those Hoi An pancakes!

Vietnam Paradise Travel, a Hanoi-based tour agency, had arranged our trip for us, booking the hotels, internal flights and arranging tour guides, all transfers and visits.

I’ve mentioned a couple of times above that we had tour guides with us a great deal, just for our little group of four. There was so much time to chat and to ask questions. This suited the teenagers especially well as they wouldn’t have asked so many questions in a big group. Learning about the home life and family histories of our guides also gave us welcome insights into daily life in Vietnam and into its tumultuous history.

We were booked into 4-star hotels wherever we stayed, these were pretty luxurious. The La Luna in Hoi An was especially spacious with really luxe bathrooms. We were always given two rooms right beside each other, which made life easy. The buffet breakfasts were always great and we did take full advantage of these!

I can wholeheartedly recommend Vietnam Paradise Travel. You’ll find lots of ideas for itineraries on their website, then just email the office to chat through your family’s needs.

Will we return to Vietnam?

Yes! We stayed in Hanoi, Halong Bay, Hoi An and Saigon on this trip. The next places we’d love to go include Sapa, for mountain trekking, the island of Phu Quoc, Hue and Dalat… and more!

Planning A Vietnam Holiday With Kids