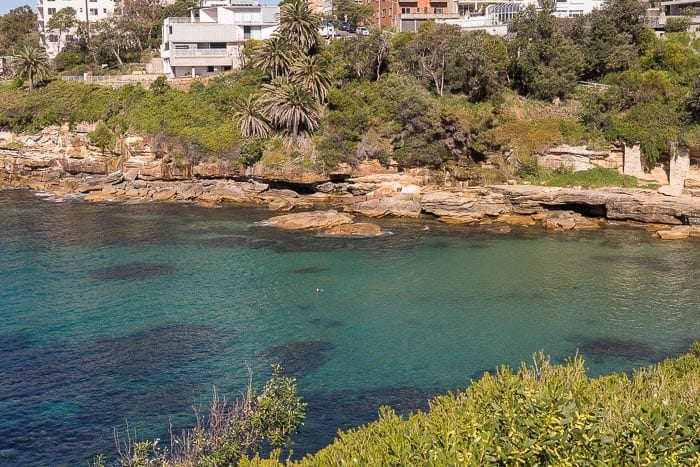 How clear is the water at Gordons Bay? Here’s a lone swimmer whom we saw as we walked

Gordons Bay is a bit of a local hero with Eastern Suburbs residents, but not widely known by Sydneysiders from further afield.

Note: no address. Accessed via the Coastal Walkway.

Gordons Bay (no, NOT Gordon’s Bay or Gordon Bay!) is a marvellous place to swim, snorkel and scuba dive, and to play on the beach and scramble around the rocks too. 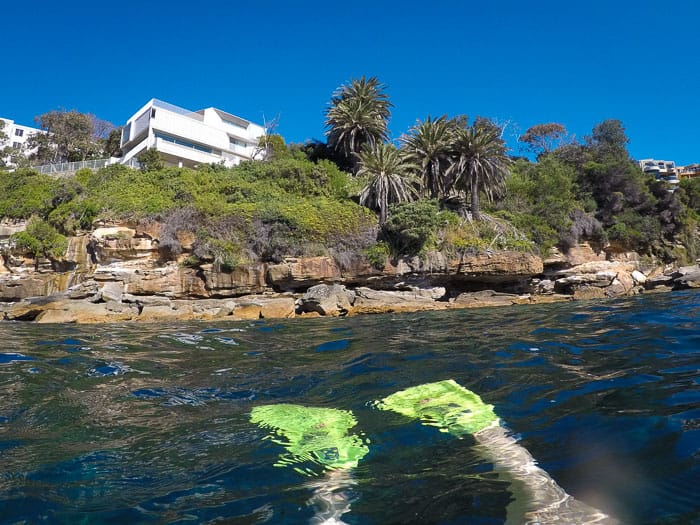 It’s one of those Sydney beaches that feels a bit special, because it’s so very pretty and just that little bit harder to get to as well. Plus there’s the Gordons Bay Underwater Natural Trail, a snorkellers paradise.

“The Gordons Bay Underwater Nature Trail is a self-guided scuba diving or snorkelling adventure. The trail can be compared to a bush-walking track in the wilderness, only it’s underwater. It usually takes about forty minutes to dive the 600-metre trail, or on a clear day it’s possible to snorkel the underwater trail from the surface. Concrete filled drums about 20 meters apart linked by a chain form the trail with information displayed on steel plaques”. Info from Randwick City Council.

The map below shows the path of the trail around Gordon’s Bay. Source: Gordons Bay Scuba Diving Club

So where is Gordons Bay?

Well, the bay is between Clovelly and Coogee, the Bondi to Coogee Coastal Walk runs along the coast here and that is how you access the beach and bay. There’s no road as such beside the bay.

Check out the map and see below for parking tips.

What you can do at Gordons Bay Coogee 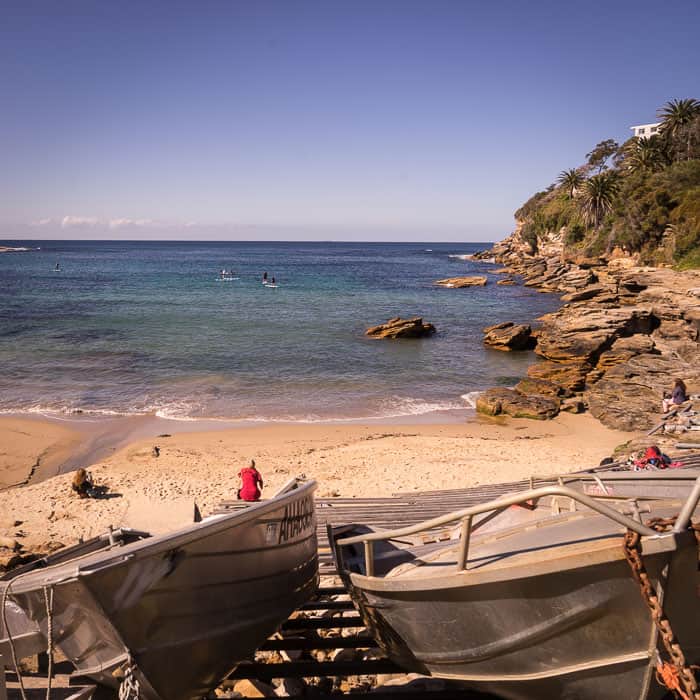 Play on the beach!  There’s a small strip of sand and often there aren’t many people there. It’s lovely sitting there by the tinnies.

The wooden ramps are quite unique along this coastline, there are few places you can launch a boat.

The Gordon of this Bay fame was probably Lewis Gordon who carried out surveying work here in the 19th century and was given a grant of land here.

Go swimming, the water is generally calmer than the beaches around about and the water tends to be very clear.

The waters tend to be calm within Gordons Bay, however there are no life guards or flags so you need to keep a really close eye on the kids. 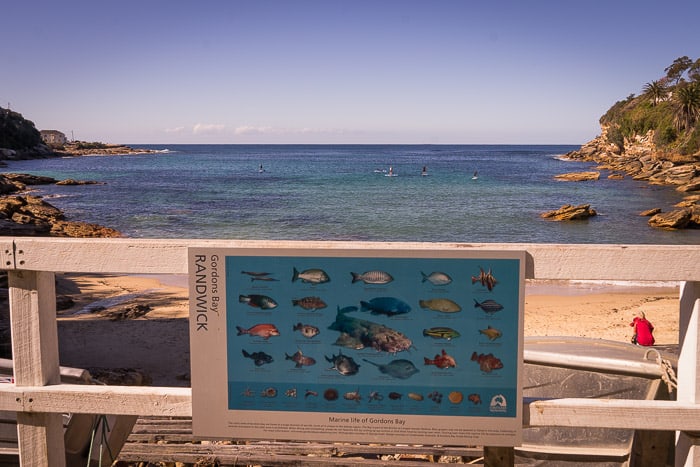 Learn about fishies, and see them. This handy board is up at the path, well worth studying before a swim or snorkel.

Snorkel!  You can enjoy snorkelling straight off the beach, or go in deeper and follow the Gordon Bay Underwater Trail. This also is a good entry level place to dive. 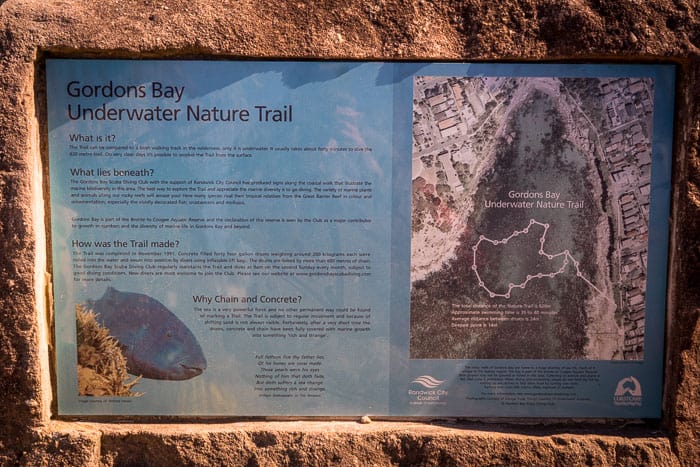 The trail starts from the rocky platform sat the north end, close to the car park at Clovelly pool. Read the signs to learn all about the marine life that abounds here 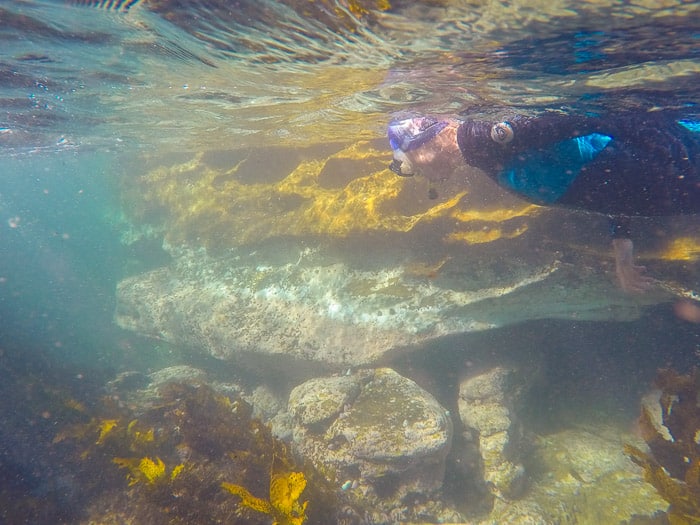 Useful information before you go

Cafes: You might want to stop at a cafe afterwards, can we recommend Seasalt Cafe Clovelly Beach

Toilets: South to Coogee Beach or north to Clovelly Beach for public toilets.

Shade: There is absolutely no shade on this coastal walk and beach. Make sure to have sunscreen, a hat and protective clothing.

Dog friendly: Dogs are allowed on leash along the Coastal Walk but not on the beach. Here’s a very handy link about off-leash places in Randwick

Mum’s report: This is generally a great beach for kids to snorkel around, the only downside is having to schlep all the kit in, plus water, picnic etc. etc. While the calm waters are usually perfect for swimming, beware of the seaward rocks and entrance to the bay, as these can be a hazard.

But it does feel special…. and an adventure. 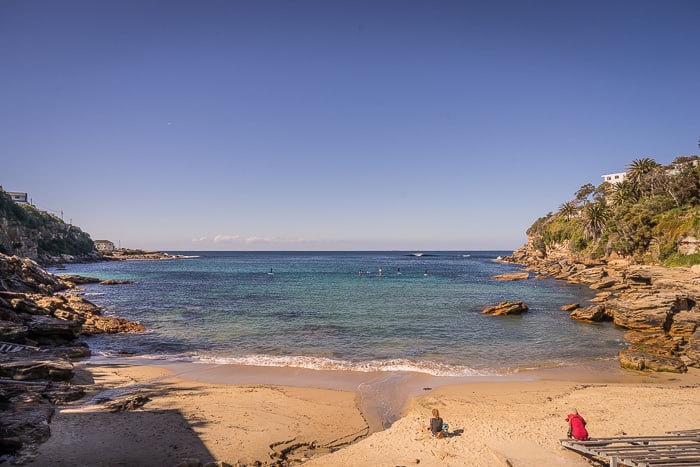 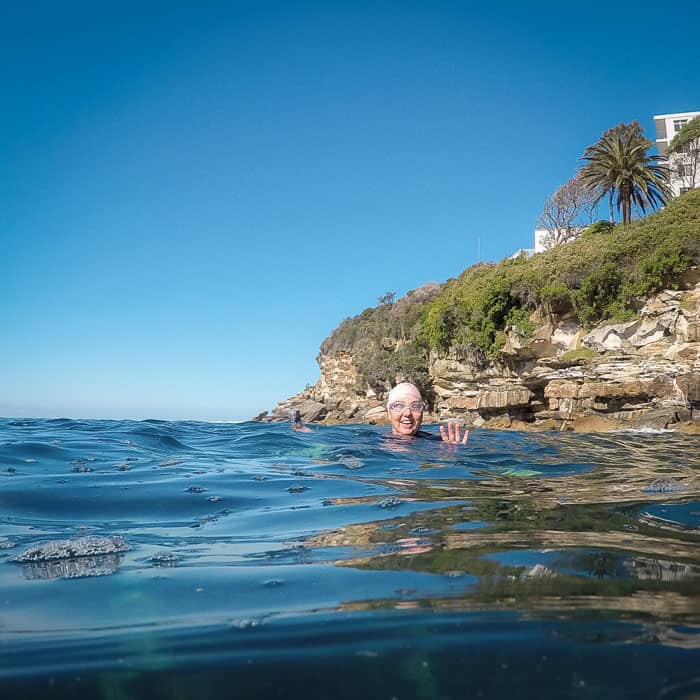 A happy me swimming at Gordons Bay! 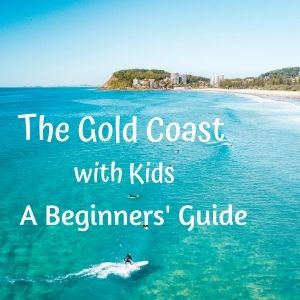 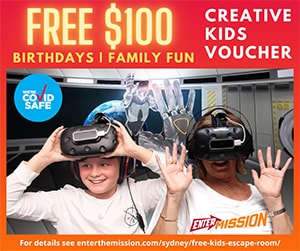 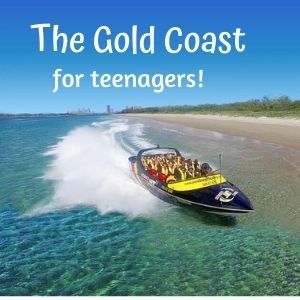